Have you ever heard someone talk about something that you knew you would love? Even when you had no idea what it even was? I have!

I was recently visiting with my sister and aunt. My aunt and my sister are similar in age and I am much younger, not in anyway pertinent to the story, I just wanted to throw it out there.  Anyway, my Aunt Vicki had the amazing opportunity of living in the UK for several years while her husband was on a job assignment. A few of our family members took the opportunity to vacation in England while visiting my aunt.  Unfortunately I was not one of those people but my sister Kathy was.  They had a marvelous time, touring and eating, and then eating some more.

They, my sister and aunt, like to discuss the foods they loved from England. There was a lot of talk about some kind of pudding and whether licking the bowl was acceptable. (Obviously not, of course).  And then there was mention of honeycomb ice cream, “The best ice cream I’ve ever had”.

me: “Honeycomb ice cream? What is that? What’s in it, honeycomb”?   (The food blogger in me is wanting to know more)

Kathy: “I don’t think so, that would just be wax”.

Kathy: “I don’t know, it had little crystals in it that melted in your mouth”.

Needless to say I was intrigued, and after asking everyone I knew (or at least 3 people), I realized that nobody knew what honeycomb ice cream was.  If you do know, don’t say anything, just let me have my joy. So I did a little research and found a few recipes, mostly from the BBC, and a couple from Australia. I’ve since deduced that honeycomb ice cream is kind of a British thing. Note: We do have a wonderful Englishman here at Bosch Mixers. His name is Bob. I should have asked Bob about this amazing ice cream. I didn’t. Next time I’ll ask Bob.

Honeycomb ice cream is basically a vanilla based ice cream with honeycomb, the homemade candy kind of honeycomb, crushed and added at the end. I have to admit I was pretty excited to try it.

Homemade honeycomb is a bit of a science experiment. Simple ingredients and easy to make with a surprise chemical reaction at the end.

You basically heat the ingredients to 300˚.  Remove from heat and add the baking soda. The soda causes a chemical reaction and the syrup foams and expands full of tiny holes. Once you pour the honeycomb into the pan and let it cool it makes a delicious light, brittle candy that literally melts in your mouth.  The candy is full of tiny holes, hence the name honeycomb.  The recipe below actually has a little honey included, although you don’t really need it. But honeycomb that tastes like honey has to be good, right?

You could use any vanilla ice cream recipe to make honeycomb ice cream. I’ve used the custard one below and our no-cook vanilla recipe also. 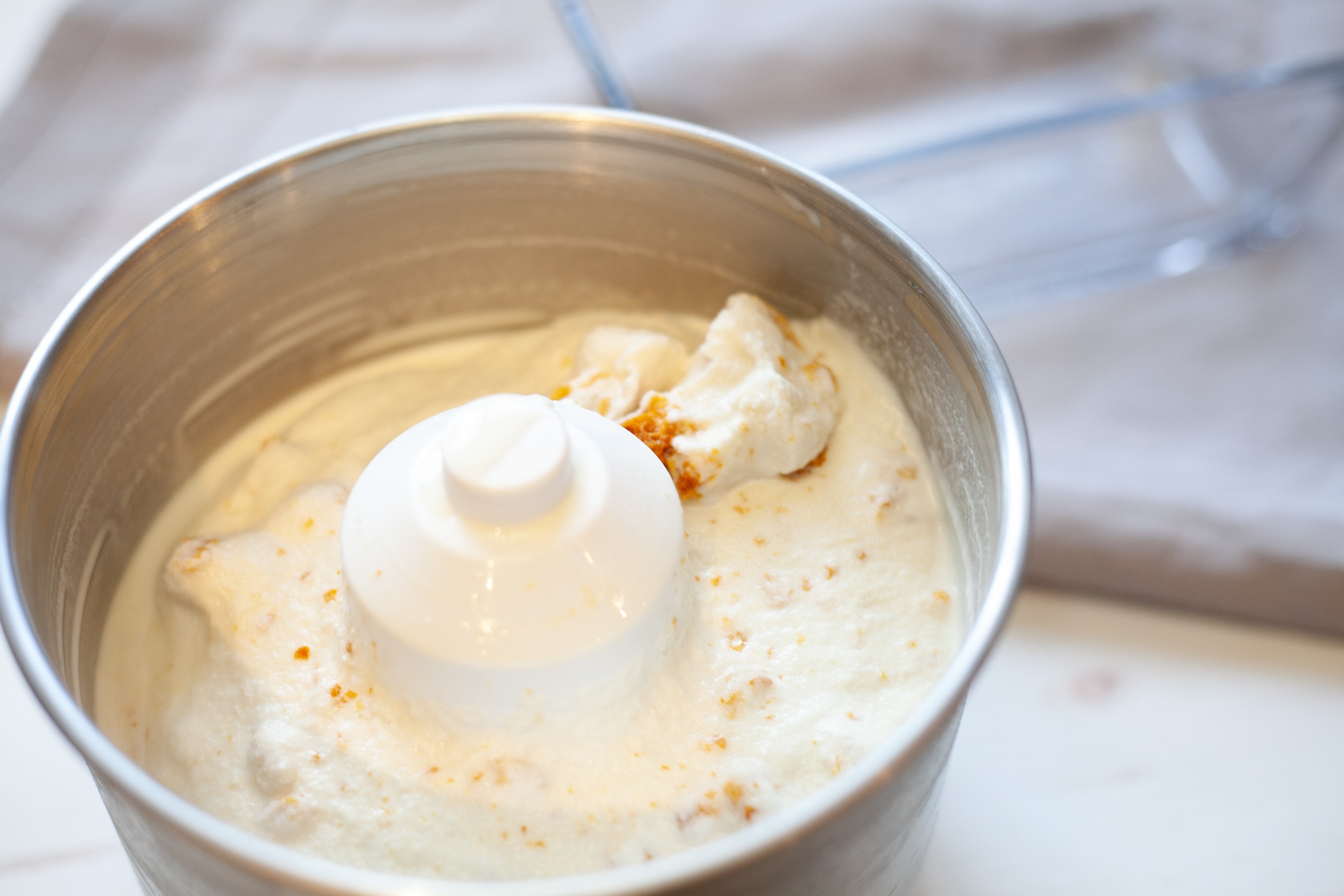 I just love the ice cream maker attachment. It’s just so easy to use. No need to freeze the bowl, just plop it in the mixer bowl and let it go. I used the Bosch mixer with the stainless steel bowl, just to see if it made any difference. It did frost up nicely on the outside of the bowl but I don’t think it cooled any faster than the plastic bowl. It took 20-30 minutes for the ice cream to thicken up.

.So, how was it? Well let me tell you what. I finished this ice cream late at night, and refused to let my hubby have any. I had to get some photos and videos of the finished product. He was not happy with me, at all!  The next day when I was taking the blog photos I caught him eating the ice cream right out of the container with no intentions of stopping.

It’s so good! A slight honey-caramel flavor, and sugar crystals that melt in your mouth. It reminds me of pralines and cream ice cream without the nuts, if that makes any sense.  You have got to try this one, and let me know what you think about it.

Note: The honeycomb will melt into the ice cream so I like to leave it in larger bits, and I really loved sprinkling a bit of the crushed honeycomb over top of the ice cream when it was served.

Heat milk and cream in heavy pan until just below the boiling point. Remove from heat.  Combine sugar, egg yolks and vanilla in mixer bowl.  Mix until completely combined.  With mixer on speed 1 slowly drizzle in the heated milk and cream until thoroughly combined. Pour mixture back into heavy pan (wiped out) and heat on medium until it starts to thicken, like a pourable pudding. Allow to cool.

Place cooled custard into ice cream bowl, place bowl into the Bosch mixer bowl. Put lid on ice cream bowl and fill mixer bowl with ice and rock salt.  Be quite liberal with the rock salt. Turn mixer on speed 2-3 and mix for 20-30 minutes.  When ice cream is at the soft-serve stage add 1 cup of broken honeycomb to the mixture and mix briefly to incorporate. Pour ice cream into a freezer container and add more honeycomb as desired.  Freeze for harder ice cream or enjoy as soft serve.